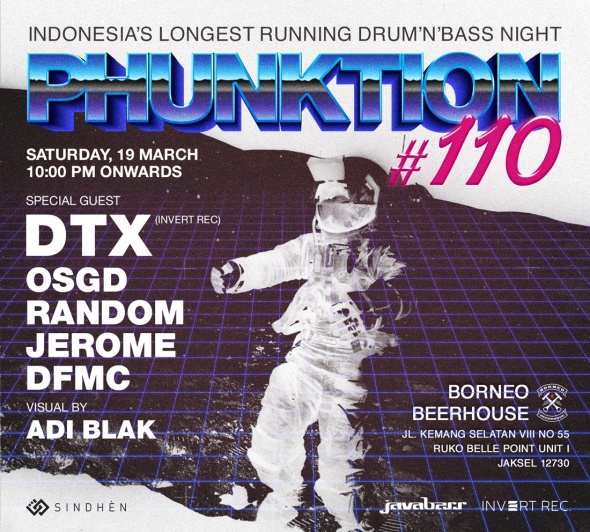 Another series of Phunktion coming soon!

In this 110th episode of PHUNKTION, we bring one of Indonesia’s finest DJ/Producer DTX, who is also running his own record label INVERT REC.  Started out producing Hip Hop music in 2001 by the name of Ares, in 2003 he was trying to broaden his knowledge in House music while he was studying Design in Perth, Australia. He then found some friends who introduced him to Drum N Bass music and started to interest himself into it, and DTX is the proof that he started producing Drum N Bass ever since. Although he produced different kind of dance music, but he chose Drum N Bass as his base music influence.
Its gonna be one helluva night, so see you on the dance floor and lets dance like nobody’s watching!
Supported by our media friends at SINDHÈN APP

This entry was posted on March 7, 2016 by dhanyarliyanti. It was filed under Events and was tagged with borneo beerhouse, drum & bass, drum'n'bass, DTX, Invert Recordings, jakarta, javabass, jerome, jungle, OSGD, party, phunktion, random.