Digital Ivy brought you a jungle jazz number that hark back to the intelligent drum & bass era. Dreamy keys, sexy solo trumpet, wicked Amen breaks and thumping sub. What is there not to like?

Forthcoming on Javabass Recordings July 28th, 2015 at all digital stores near you.

This event is also to enliven the last days of MONSTORE BAR,
so Let’s dance like nobody’s watching!! 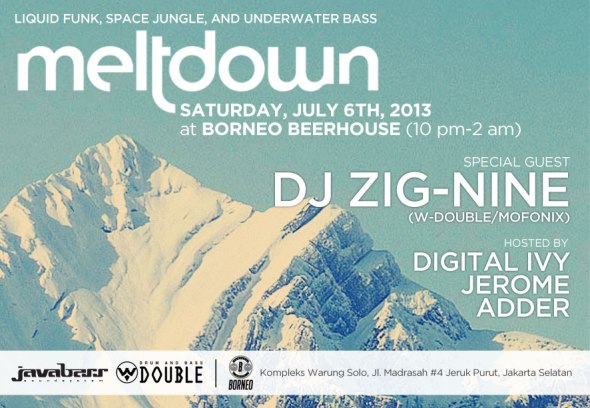 Probably the last bass music gig before Ramadhan, we bring you MELTDOWN, all about Liquid Funk, Space Jungle, & Underwater Bass…

In 1998, he left the United States to live in Kobe, Japan, performing at
events around the greater Kobe/Osaka area.
In 2005, ZIG-NINE moved to Nagoya, where he is currently a resident DJ
for “W-DOUBLE,” a regular drum’n’bass event at DOMINA.

ZIG-NINE is also one-half of the DNB duo “MOFONIX” alongside DJ HALCYON
from New Zealand.

Originally Digital Ivy started from music project called Harmonic Distortion in the late 05, but latter split up because different carrier pursuing. In the early years Digital Ivy played IDM, trip hop in early 05/06,influenced by sounds like Massive Attack, Telefon Tel Aviv and other chilled out music. While producing tunes over the years by accident he fell into drum & bass. The more he dug the more he found out, it was also so fun knowing how so many sub genres from DNB are. The blur between genres is what makes Digital Ivy unique, AND you will hear lots of reverbee sounds combining with analog and digital sounds to create a whole atmosphere.

Digital Ivy made successful debut with a track titled ‘Waiting For Something’ in Javabass Recordings’ compilation ‘Homegrown 2 EP’. Now he follows it up with his first proper release titled ‘Light Waves Invasion EP’. He is the top selling artis on Javabass Recordings right now, makes him one of the most Indonesia’s anticipated young producer.
On this PHUNKTION:81 he will bring you the other side of him, his debut on double decks. Lets roll!

Digital Ivy made successful debut with a track titled ‘Waiting For Something’ in Javabass Recordings’ compilation ‘Homegrown 2 EP’. Now he follows it up with his first proper release titled ‘Light Waves Invasion EP’. The lead track ‘Light Wave Invasion’ is a deep chilled out tune with laid-back attitude and dreamy vocal delivery from Miranda Rae. This track is also backed with remix from Random, turning it into an uplifting and club friendly tune that stays true to the original’s dreamy vibe. ‘Power Amplifier’ is a straight up tech roller and ‘Shockwave Breaker’ is another tech roller that twist you in and out as if you’re being pounded by endless incoming waves. Keep your ears open as more great things are coming from this young producer.

Digital Ivy’s Light Waves Invasion EP is out now on Javabass Recordings and available at the following digital stores: 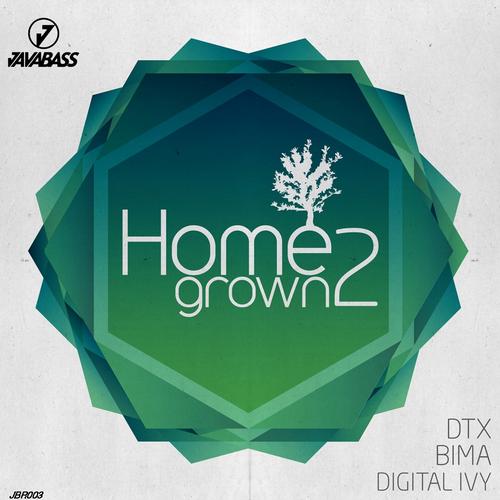 DTX – The Space Alone by JavabassRecords

Digital Ivy – Waiting for something by JavabassRecords

To celebrate the release , we upload the Homegrown Mix session by Jerome, recorded last year not only to celebrate our 10th Anniversary but the release of Javabass Recordings. Its a showcase some of the unreleased dubs & upcoming tunes by Indonesian DnB Producers that just been released on our label . Enjoy the mix