The first PHUNKTION of 2013 was a great way to start our new year. The evening were started by Jerome with some rolling liquid. At midnight, our special guest, Jebar from Russia’s most respected lquid dnb label Liquid Brilliants smashed out the place with great mix of soulful liquid rollers and bouncy ragga. At 1.30 out other guest Sixteen from Dafkaf took over with some organ shaking dub roller before switching it up to all out drum’n’bass half way into his set. Our own Random close out the night with classic liquid roller sets. The evening might started slow but it ended with a bang! Here’s for more great upcoming parties in this upcoming year!

END_OF_DOCUMENT_TOKEN_TO_BE_REPLACED 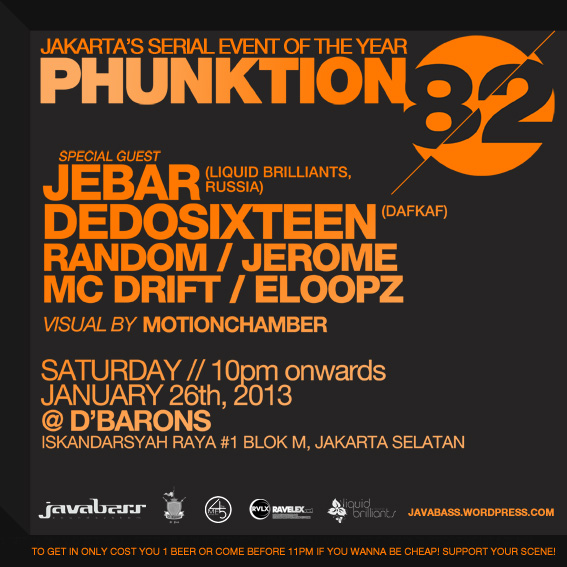 =====================
Jebar – DJ and producer of more than 9-years of experience. One of the popular musicians of the Urals, a well-known electronic music lovers around the world. Jebar by 3 releases on vinyl (Defunked, Soundtrax, Blu Saphir recordings). His music is a mixture of dancefloore soulful, liquid funk & dubwise tunes that leave no one indifferent person and have only positive emotions. Which would not have acted Jebar, his appearance in public accompanied by success, applause and enthusiastic audience!

He not only speaks and writes music, but also in 2002 been actively involved in the night life of the city of Chelyabinsk, hosting events and brings DnB guests. More! Since 2008, engaged in the development of one of the oldest clubs in Russia with more than eleven-story night club GARAGE UNDERGROUND. Jebar Art Director Club.

In this case, it seems incredible, but Jebar constantly touring all over the globe, which is confirmed list of cities he visited New York, Moscow, St. Petersburg, Minsk, Volgograd, Novosibirsk, Yekaterinburg, Chelyabinsk, Orenburg, Omsk , Izhevsk, Tomsk, Togliatti, Magnitogorsk. And this is not a complete list.

In his set, he prefer only light of the musical material. In May 2007, he released a mix CD in St. Petersburg – Dj Jebar – Colours of Summer Mix – on the label REWIND REC, accompanied the release of two-party presentation: Chelyabinsk and Saint-Petersburg.
2010 saw the release of their debut album. In 2011 the expected release of the second album already.

Dedosixteen or better known as Sixteen became a student of the hip hop movement after watching Dj Cream Spinning at Parkit back in the days. Beginning with his residency at EX Plaza Indonesia around 2004, before he joined D’makaveli one of the biggest hip hop party promoters in the scenes of Jakarta Night life in 2005 for 2 years. He has made a name for himself in Jakarta’s RnB club scene and quickly gained more knowledge and experience of the whole entertainment scene by playing at various parties and events.

By the end of 2007, he moved to Birmingham United Kingdom to continue his study in Birmingham University. Playing in HouseFM radio in London for couple a month in early 2008 with Soulful Angus, triggered him to explore different kind of music. He has got more influences from UK Djs such as Mr Scruff, Four tet, Tim Green, Julio Bashmore, Maya Jane Coles, Jimpster and inspired by Skream, Benga, Caspa J:Kenzo, Loefah, Mala & Coki (Digital Mystikz ) he discovered his musical faith through Dubstep.

Since he came back for good to Indonesia, Sixteen’s an open minded DJ who has no limitation in accepting new kinds Of Music and Beats, his sound can best be described as Dubstep, Grime, 2step, with an expertise of jazz, afrobeat, deephouse, reggae, rhythm & blues. Share deck with his favorite dj’s Cooly G, Diplo, Shockone, El Hornet of Pendulum and now his joining the most respectable label in Indonesia DAFKAF INC along side Remy Irwan, 1man, Danish w, Dialogue 7, Andre Uchiel, Putra, Rangga, Mamit, Alvin K & Motioninja triggered him to bring dubstep to the next level in Indonesian Dance Scene